With Mr Darcy at Pemberley

Just me, taken by granddaughter

I was born in a small rural town in Hertfordshire, England. My ancestry has been traced back to the 3rd century AD in Nottingham, England. Prior to this we were Danish Vikings.
Until the early 20th century, we were landowners and farmers in Kent & Essex. With the modernisation of farming techniques, we sold up and moved nearer to the capital, finally settling in Tring.

My paternal grandparents, who inspired my love of the past, were bother teachers, specialising in English and History.
My paternal grandmother was also a descendant from the Scottish clan of Galbraith. We have our own tartan in the colours of black, green, blue and white squares.
My mother is descended from the single family of Standingford, (often spelt the Anglo-Saxon way of Stanton). There is only one family with this name and all, no matter how distant, are related. We have our own heraldic shield and family motto. Dum Spiro, While I Breathe.

I am the middle of 5 children, with an older sister, a twin brother and a younger sister and brother.
My hobbies include reading, writing, listening to classical music, walking the dog and jet skiing.
I read a variety of authors, including Oscar Wilde, Shakespeare, Noel Coward, and Jane Austen, while my favourite composer is Bach and Ivor Novello.
I am a full-time writer, but I also contribute articles to various magazines, charities, and private publications.
Before I decided to become a full-time writer, I worked for the British Government.
My husband and I have been married 40 years and we have two daughters, four grandchildren and one dog.

I dearly love to dress up. Above on the right you can see me in Regency dress with Mr Darcy, aka Matthew Dimbleby. (www.dimblebyceramics.co.uk) This was taken at ‘Pemberley’  (Lyme Park) 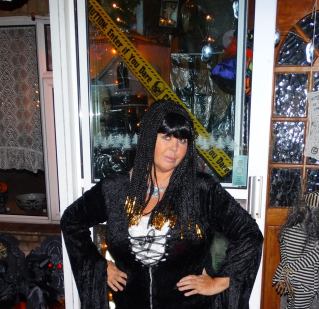 My hobbies include visiting stately home, and browse around antique shops and flea markets. Most, if not all of the pictures I use on my blog are taken either by me or my husband. We have been together over 40 years, and here’s to the next 40, (God willing)

Francis and me on the roof of St Peters Basilica, Rome.

We still live in Hertfordshire, with our dog Peggy. I have two daughters and four grandchildren. We believe in the tradition of family, and spend every Thursday evening having dinner together. We are active Christians, involved in many aspects of our church community and also do voluntary work for several charities.

2 thoughts on “About Me”

This site uses Akismet to reduce spam. Learn how your comment data is processed.